I was in Stanstead Abbotts just before New Year and enticed my aunt out to benchmark hunt.  Actually, it's not hard as she loves walking and was quite happy to humour her niece with her geeky needs.

Actually, my Stanstead Abbotts benchmark hunt began a couple of years ago when I was having breakfast in their front room, looked out their window and exclaimed "you can see a benchmark from your dining table!"  I then had to explain what I meant by this and ever since then there has been a tiny part of me that's jealous not to breakfast in view of a benchmark everyday.

There aren't many benchmarks in Stanstead Abbotts.  In the two OS grid squares I downloaded data for there were only 9.

The first was a cinch as it's my breakfast benchmark. 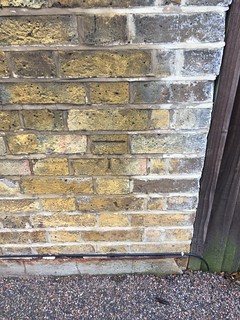 The second, further up Cappell Lane, we found behind a bush but I somehow didn't take a photo (finger trouble...). Ah well. There was a benchmark further up the road in a culvert which we couldn't locate - neither the benchmark nor the culvert surprisingly - but perhaps that was because I was slightly eyeballing the grid references off my map (tsk). There was a rather nice postbox there though complete with tiled roof. Very London commuting suburbia I decided. 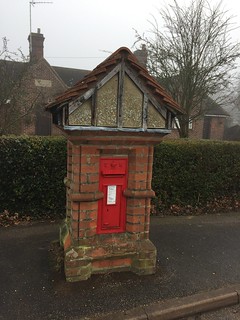 We walked on up and found this mark on the bottom of a set of steps. 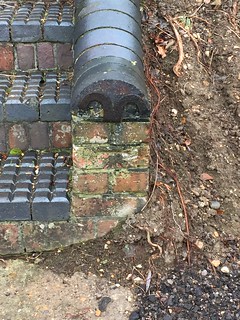 We looped north, crossed the Greenwich Meridian into the western hemisphere, and strolled into Ware for coffee.  I should have downloaded the benchmark list for Ware as, try as I could, I didn't spot anyway whilst there.  There's always a next time.

It was a misty and calm walk back along the River Lee Navigation. 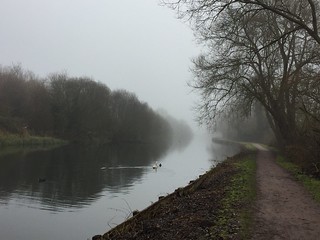 Instead of heading straight into Stanstead Abbots we detoured into St Margarets to bag this mark on the church. We couldn't find the other one on the Clocktower as there is a new housing development around it with large security gates, and we thought we'd be trespassing. 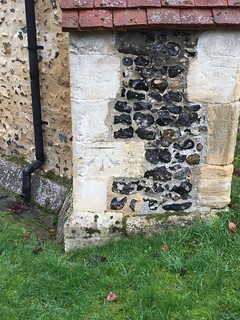 Anyway, back into Stanstead Abbots and the eastern hemisphere.  The benchmark on the Red Lion pub looks to have been covered by a thick layer of plaster.  And the one on the wall around 14 Roydon Road eluded us too.  Not that Linda didn't search very fastidiously (see?  this hunting is addictive after a while isn't it?).  Anyway, our last find was on 52 Roydon Road.  Nicely whitewashed. 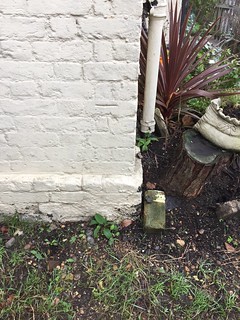 The following day an amble back into Ware took us along the New River. This was dug in 1613 years ago to provide water for London.  So actually not a but aqueduct.  It falls 5.8m over its 62km course.  That would have been fun to survey. 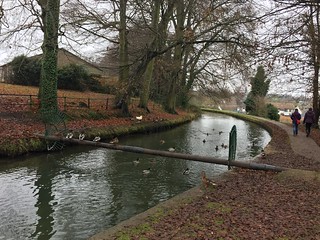 The ducks seem to like it although I suspect river features like this make it totally unnavigable. 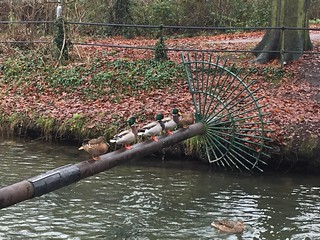