Samoa - Sunny Surveying and being a Geo Detective

Last week I was in Samoa undertaking some geodetic work on Upolu Samoa.  For those not over familiar with the Pacific Ocean it is 3.5 hours flying time from Auckland, at approx 14S, 172W. 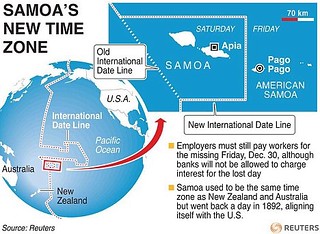 To add complexity, it is ahead of GMT, despite being west of Greenwich, ie on the same day as New Zealand.  Its sister islands, American Samoa, are obviously on the same day as USA so behind GMT.  Samoa moved days on 30 Dec 2011.

It is a beautiful island as you'd expect.  Its coral reef is visible on the horizon defined by the waves breaking over it, and inland (which isn't far for an island 75km long with a total area of 1125 sq km) there are volcanic mountains, forests, heat and downpours.  And bugs - my ever present travelling companions.

Anyway, my colleague Martin and I were there to assist the local surveyors relate their survey to a geodetic reference system, WGS84 Datum.  The local realisation of this in Samoa is SGRS 2005, Samoan Geodetic Reference System 2005 (report here), which also defines the Samoan Mapping Grid SMG, UTM Zone 2S.

We started where all good surveys start, on a known point.  This was Geo39 and is the coordinate listed on the last page in the report reference above.  Except it's wrong (more about that later).

Geo39 is at the Met Station just outside the capital, Apia. 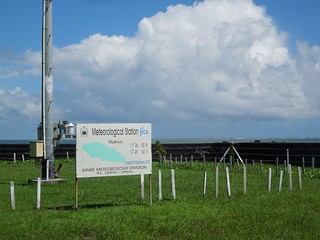 It was not an easy find buried ~10cm underground.  The local surveyor, Pollard, rang his brother for directions as to how to find it.  It turns out his brother is the Chief Surveyor for Samoa so not a bad shout when it comes to finding buried blocks. 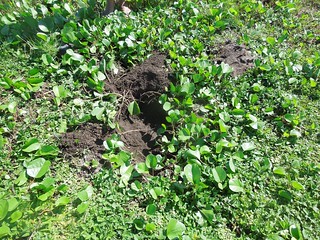 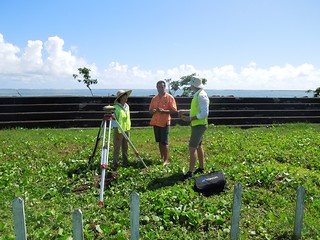 I was left to babysit the GNSS whilst Martin and team moved onto the next point. Samoa, sun, ocean, GNSS, an hour's wait - what is there not to love?

The second point was, once again, buried.  Actually it turned out all but one were.  It certainly keeps them safe from tampering.  Fortunately, as we had local surveyors with us, we were able to quickly locate them. 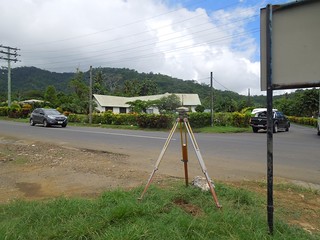 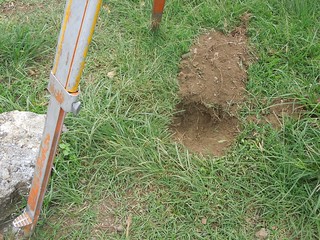 We continued to leap frog our way up and over across the island. 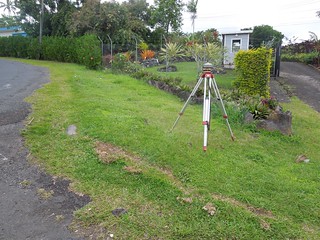 I was being ferried around by Byron, the CAD guru for the engineering group we were working with.  He had had his chauffeuring duties sprung on him that morning and at one stage muttered "if I'd known I was going into the field, I'd have dressed appropriately".  He had his tailored lava-lava on.  Quite natty with a sun hat and hi vis jacket don't you think? 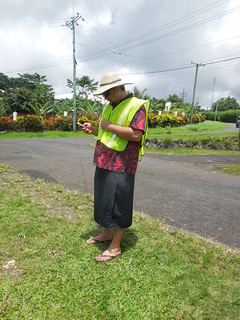 Our 3rd point was our highest, at approx 800m elevation.  The smiley face hides how hot it was.  I had to keep covered up to prevent sun burn but I noticed that as the survey progressed Byron and I spent more and more time in the air conditioned car than out in the sun admiring the scenery. 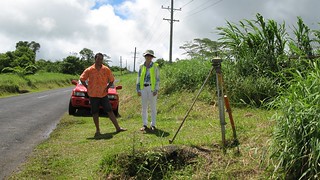 Byron tried to keep in touch with his office. 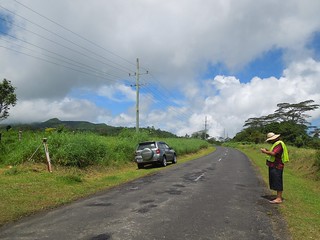 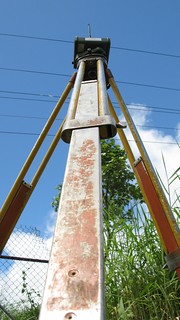 We moved on over the island.  I found this an odd place to have a control point - under a tree?  It was our least accurate GNSS position unsurprisingly. 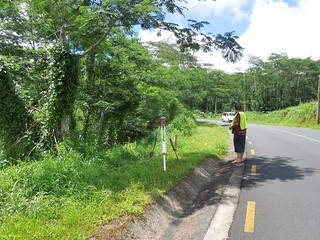 We completed the road but, frustratingly, couldn't complete our survey on a known geodetic point as it was destroyed in the tsunami of 2009 which hit the south of Upolu.  So on our way back we bagged another geodetic point mid route.  This had a beautiful backdrop of the Baha'i temple.

It was only at this point that I realised that Martin had not been setting up the tripods each time.  There I was thinking he was doing all the work when the Samoan surveyor leapt out of the car, trotted across to the control point and levelled the tripod.  "Well, he seemed happy to do it each time," smiled Martin. 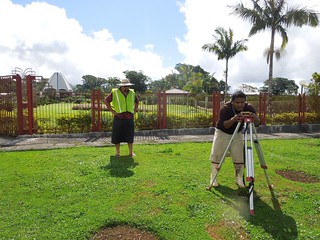 I was actually just as taken by the fact that our surveyor was wearing wellies.  OK, in the UK surveyors wear wellies because it's cold and muddy.  But in that heat? 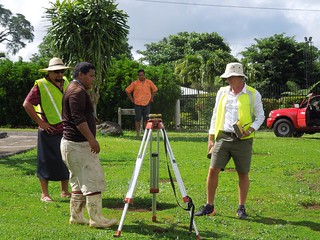 This was an easy point to find as it's proud with the ground.  It was also the playpen for the giant African snail that was circulating it. 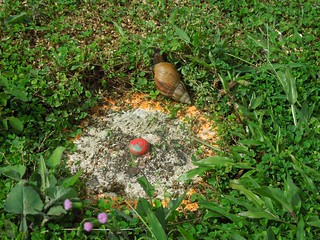 It was at this point that I realised they'd driven off with my tape measure.  Surveyors? Can't trust them... 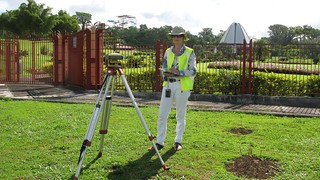 Obviously, the field work was just part of our role in Samoa.  We met with the international engineering group consisting of environmental engineer, road designer, human economic specialist and local engineering expert. 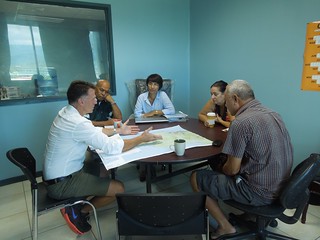 Part of my role, as you'd expect, was to resolve the connection between the local survey and WGS84 Datum.  So for this I went to see the Chief Surveyor at the Ministry of National Resources and the Environment, MNRE.

It was here that I discovered that the beautiful coordinate in the back of the report referenced earlier was not correct.  I had my suspicions as both eastings and nothings are x.000m.  It was also 3m different to the WGS84 coordinate we'd derived.  But the final confusion was that it was different to the one MNRE had given me.  Indeed, as I chatted with Petania, the Chief Surveyor, we realised the confusion came from a report which had the correct coordinates embedded in it but then the wrong ones on the summary page.  It's more than just a rounding error but I'm going with Petania's advice.  Perhaps I should put 'geodesy detective' on my business card as that's what I spend my time doing - Ruth the Geodesy Sleuth.

Samoa's local cadastre is referred to Lemuta grid: not a datum but a plane table grid developed early to mid 20th Century, see para 4.1 in here.  It continues to be the grid used for their cadastre to date, although they are migrating to SGRS2005 where they can. 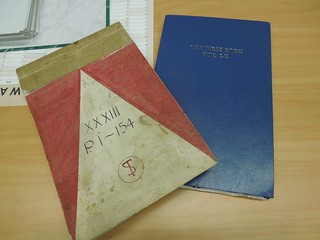 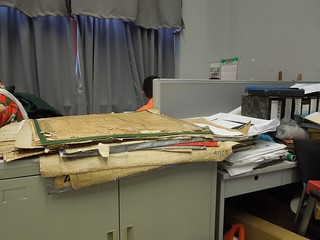 A useful overview is in this FIG report.

As well as MNRE we visited the Land Transport Authority  On leaving we encountered a classic Samoan downpour much to the amusement of one of the engineers. 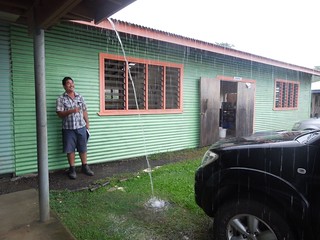 Once we'd processed and completed our 'day job' we went to find a Ruth treat.  This is the permanently recording tidal station at Apia Harbour, APIA B.  You can see from this loss of data when the tsunami hit and consequential shift in levels from 2009.  So did the sea level rise or the ground sink?  Probably a bit of both. 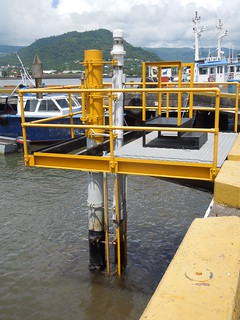 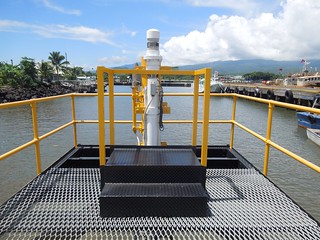