Our final drive was a slog from Upington back to Johannesburg.  We fueled up on breakfast fruit. 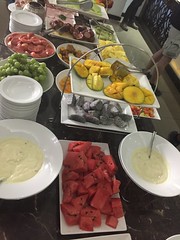 And said "Merry Christmas!" to Upington which still has its decorations up.  [They're not uber early but late as there is an official banner wishing us all a peaceful end to 2016 and a properous 2017.] 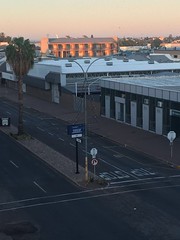 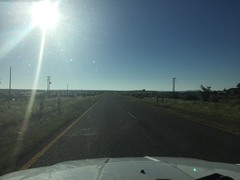 It was a long day and even the novelty of road photos wore off. 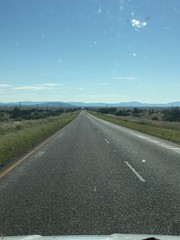 I worked on my MSc and Martin drove, in increasingly busy and heavy traffic as we nearerd Johannesburg, which we hit (not literally) at rush hour which was a bore.  And so, 11 days after we started, our road trip was over. 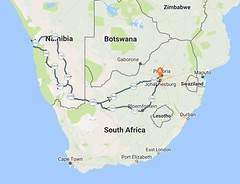 We covered ~4500 km (of which I gallantly drove a mere 100 km: how embarrassing), more fuel stops than I could count, 10s of cans of coke and bottles of water quaffed, nuts/fruit/vegetables munched, 7 different places stayed in out of 10 (a different one each night excepting for Swakopmund) and marvelled at storms, sand, sunsets and sunrises aplenty.  We met new and old clients, fished for work, caught up on old news, battled wearily with slow internet speeds, read numerous papers on spatial data sets and dreamed big dreams for our company.

I totally crashed that evening.  So whilst the others ate and chatted I slept.  Road trips are great but sometimes it's good to stop!
Posted by Ruth at 12:33